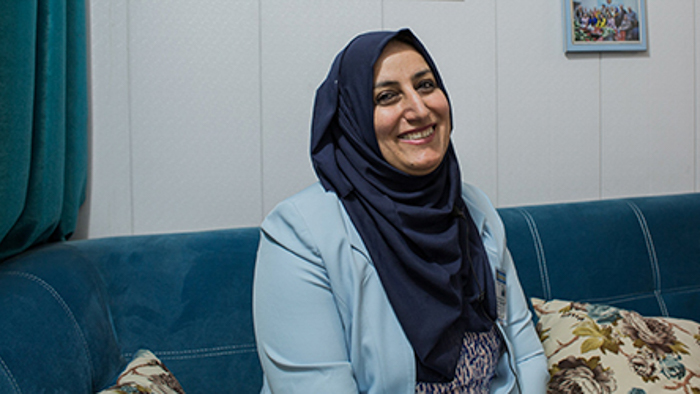 When Iraqi women face discrimination, her legal clinic can help

Rajaa Abd Ali says the first time she felt discriminated against because of her gender was when she was 16 years old. She was expelled from her high school in Baghdad without reason, she says. Despite the setback, she promised herself she would study law and teach women their rights.

Today, more than two decades later, she is running a project in the heart of Baghdad that’s helping women handle inequities and prejudice.

“I suffered Iraqi society’s discrimination against women in my own skin. It was an injustice. That’s why I studied law, because I didn’t want any woman to have to go through what I suffered,” she says.

Ms. Ali, now in her mid-40s, is a lawyer for the Iraqi Women Journalists Forum (IWJF), an association that works for women in Iraq’s media sector. That group, together with two others – the Iraqi Civil Society Solidarity Initiative and the Italian nongovernmental organization Un Ponte Per … (A Bridge With) – launched the Shahrazad campaign in 2014. And in 2016, civil society activists opened the Shahrazad Center – a legal and digital clinic providing social, legal, and information-technology support to Iraqi women. The center also works to protect the activists who fight for human rights.

In the bright and welcoming rooms of a two-story house in Baghdad’s Karrada district, Ali says, “Here we teach women their rights, because education is the most powerful weapon for them.”

After the United States-led invasion in 2003 and the subsequent breakdown of the rule of law, Iraq witnessed a rise of armed groups and militias seeking to impose their sectarian rules. The domestic political instability intensified with the emergence of the Islamic State. Although overall in the country, conditions have improved since 2014, gender inequality and the challenges faced by women are still pronounced.

“An increasing number of women are not allowed by their own community to be part of the public space,” says Azhar al-Shaarbaf, another lawyer and activist who is involved with the Shahrazad campaign. “After 2003, families were afraid to send their women and girls to school or to work because of kidnappings or bombings or sexual assault,” adds Ms. Shaarbaf, who says she herself was threatened several times by radical groups.

The Shahrazad Center is designed as a safe space where women can have access to free legal services in cases of domestic abuse, violence, or threats. They can also participate in workshops, seminars, and recreational activities.

In the past year, it has provided legal aid to 72 women. Although the numbers are low, they are growing: More Iraqi women who face obstacles in their work or social lives are reporting abuses to the Shahrazad Center.

The digital clinic that’s part of the center offers training courses on both cybersecurity and physical security and teaches women to defend themselves against virtual threats and attacks.

“During our courses, we give women the tools to understand how to use social media, how to improve password security, delete data, or use [virtual private networks],” Ali says.

Belkis Wille, a senior researcher on Iraq and Qatar at Human Rights Watch, discusses the help available to women in Iraq. “There is very little protection of the women in Iraq,” she says in an interview via Skype. “In such circumstances where the Iraqi government doesn’t provide any form of protection or shelters for vulnerable women, projects implemented by the civil society, like the Shahrazad Center, are essential and very important.”

Those who have contacted the center include homemakers, doctors, professors, and journalists. One journalist who has sought assistance from the legal clinic is Israa Tariq, who was working for Al-Nahar, an Iraqi TV channel that has received US funding.

“I knew that other women have been helped by the legal clinic, so I came here because I felt safe to ask for advice,” Ms. Tariq says as she waits to see a lawyer at the center. The channel “didn’t pay my salary for three months. I resigned, but I want my salary.”

A number of women have received help in cases of divorce. Others are having issues in child custody cases or are victims of domestic violence.

Houda, who requested that her real name be withheld for security reasons, says she was left by her husband to bring up their two children without any financial assistance. “I came to ask for help. I don’t even have money to raise my kids. How can I afford a lawyer?” she asks.

For almost two years, Ali and Shaarbaf have followed such cases.

“The Iraqi law provides for divorce, but for single mothers it is difficult to keep custody of children,” Ali says. “In spite of everything, we were able to win several legal cases.”

As Ali sees it, legal instruments do exist to protect women in Iraq. “There are inactive laws that need to be activated and laws [that need] to be passed, such as an anti-domestic violence law.”

The Shahrazad campaign was itself formed in response to proposed legislation – the so-called Jaafari Personal Status draft law, which, among other things, sought to legalize the marriage of girls as young as 9 years old.

As part of the Shahrazad campaign, women from across Iraq met and put pressure on the Iraqi parliament to demand more rights. Thanks to the women’s protests and demonstrations, the Jaafari legislation was not approved by the parliament.

At a meeting of women in December, the IWJF announced the establishment of a network of women human rights defenders in Iraq. The Shahrazad Center has become a base for such activists. Here, they organize meetings, debates, and conferences, and they exchange experiences and good practices.

“Women [in Iraq] can empower themselves, but they need to know their rights,” Shaarbaf says. “What we try to do is to inform and help them to not be afraid.”