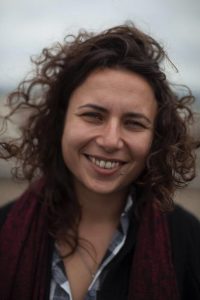 During my career, I have had the opportunity to produce several reports and in-depth investigations on the Syrian crisis, on the struggle of Tunisian women who search the disappeared in the Mediterranean, on the offensive in Mosul and Raqqa, and on the wives of the Islamic State’ fighters.

In 2018, I created and produced “Donne fuori dal buio”, an interactive webdoc which traces the stories of four Iraqi women fifteen years after the US invasion. For my reports during the siege and liberation of Mosul and Raqqa, I won the Ivan Bonfanti Prize, the Mediterranean Journalist Award, the Golden Dove for Peace Award and the international prize “True Story Award”.

In 2020, I created and produced “Iraq without water“, an interactive and multimedia webdoc, which tells the story of young Iraqi environmentalists who fight to protect the right to water.

In 2021, I wrote and directed the web-documentary “Diritti in Circolo”.

I’m a member of FADA collective.

I got a M.A., an International Joint Master Degree on Euro Mediterranean Relations from University Rovira i Virigili of Tarragona (Spain) and Saint Joseph University, Beirut (Lebanon). My dissertation was awarded as the best dissertation in Political Science of the academic year 2012/13. In 2011, I got a B.A. in International Relations from University of Milan, Italy with a dissertation on Italian mafia, ‘ndrangheta and exploitation of migrant workers in the agriculture. In 2012 I got a Postgraduate Diploma in “International perspectives of the Organized Crime”, with a focus on Nigerian, Mexican, Russian organised crime, trafficking and smuggling.

I worked as communication assistant for the Humanitarian Corridors project for The Federation of Protestant Churches in Italy (FCEI) and Sant’Egidio Community. I worked as social media manager for the Italian Ministry of Education, Universities and Research (MIUR) and the Falcone Foundation during the official commemoration of judge Giovanni Falcone, managing and producing contents for the social media channels.