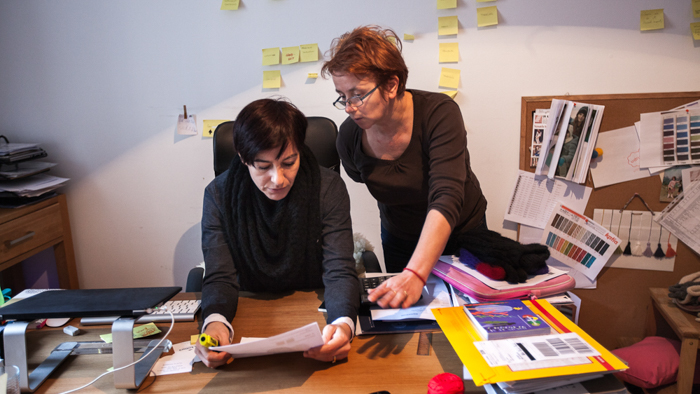 Nadira Mingasson started the weaving enterprise Udružene in Bosnia-Herzegovina. It’s given women participants a sense of community – and a source of income. Photos by Arianna Pagani

SARAJEVO, BOSNIA-HERZEGOVINA — Nadira Mingasson was 19 years old when the Bosnian war forced her to flee to Paris. She built a new life there, completing studies in clothing design and starting to work for fashion houses.

But she promised herself she would move back to her homeland. And a trip in 2008 to visit family provided the catalyst.

During the visit, she saw the beauty of the handmade fabrics being woven by women from her country, mostly as a hobby. She met some of the women and was touched by their stories, especially their memories of the war and its aftermath.

“Most … women live today in rural areas where there is no chance to get a job, but they know how to knit thanks to their mothers or grandmothers,” Ms. Mingasson says. “That was the moment when I decided to turn the hand knitting and the Bosnian handicraft into a paid job, involving women knitters who possess these traditional skills that are at risk of disappearing.”

And so in 2012, twenty years after she fled, she moved home to start a weaving enterprise called Udružene, meaning “unified women” in Bosnian.

Udružene uses woolen threads to connect women who experienced the brutal ethnic conflict that tore the region apart between 1992 and 1995. The knitters come from different ethnic backgrounds and from different regions. The association also includes women who have suffered domestic abuse.

Through their creative work, these individuals have the opportunity to forget their difficult pasts, at least for a moment, and to become active members of Bosnian society. Just as important, the garments they make provide a source of income as sales ring up across Europe.

Projects like Udružene “allow women to be at the centers again, not anymore as victims but as protagonists,” says Selma Hadžihalilović, director of the Women’s Network BiH, an informal coalition based in Sarajevo, Bosnia-Herzegovina. “What we need in Bosnia is this kind of reconciliation.”

Since the war, the status of women has slipped in many parts of the country. The female unemployment rate is high, and many women are excluded from social and political activities as well. With the exception of those living in cosmopolitan Sarajevo and other more populous cities, women often lead isolated lives.

“Women in Bosnia and Herzegovina are invisible. They lost the habit of being part of the society,” Ms. Hadžihalilović explains. “In 1946, we had [the right to] vote, right for an abortion, and free medical aid; there were antifascist councils of women. But after war, women have not been involved at all, [not even] during the peace process.”

A key goal of Udružene is to help women reintegrate into the economic and social fabric of their communities. Mingasson launched the project in September 2012 with financial support from the Norwegian Embassy in Sarajevo, as well as private donations.

Women attend training sessions in the Udružene office in Sarajevo. They receive instructions and pick up wool and patterns before heading home to start production.

“At the beginning we trained 15 women, but in less than four years, by word of mouth, we have more than 300 qualified women,” says Mingasson, who adds that “there are 100 in the production regularly and 50 more when orders allow.”

The training, she notes, is in-depth to help ensure the women reap financial gains.

“There are many [nongovernmental organizations] and [other] organizations working with crafts and knitting, but you need to have a market, sell what you produce, and be sustainable,” she says. “For this reason, we explained to them all the entire production and selling process. We taught them everything: They are inside [the project], they are involved, and they feel part of everything.”

Udružene has its own small clothing line, and according to Mingasson, its revenues more than doubled in two years – from €88,000 (nearly $100,000) in 2013 to €212,900 ($238,000) last year. Udružene has been doing business with prominent designers in Europe, including Ivana Omazić in Croatia and Michaela Buerger in France.

Working with such designers means the requests and standards are very demanding, but Mingasson has been confident that Udružene is up to the task. “I knew that the women could meet those standards. They only needed to update their skills,” she says.

The response from the designers has been favorable. “Working with Udružene was a fantastic and a very positive experience,” says Ms. Omazić in an email interview. “We were amazed by their openness, drive and desire to work, as well as by their good will to research and experiment with the knitting.”

Omazić describes a special knitting process that her team and Udružene developed together, emphasizing volume, texture, and structure. “Precisely, we made a wool coat, two cardigans, a top and a voluminous cape for the IO Ivana Omazić AW2016 collection,” she says. “You can tell by just looking at it that it was made with love, precision, and pride.”

Udružene’s office is an unassuming first-floor apartment in an old building in the center of Sarajevo, a few steps from the Miljacka River. Outside the office, the chatter of women’s voices is clearly audible. Inside the bright apartment, a dozen women sit in a circle holding tools and balls of wool.

The only one standing is a small, energetic woman whose job is vital to the process: Seida Avdic is the quality controller for Udružene. She comes from eastern Bosnia, from a village in what’s now Republika Srpska.

Ms. Avdic doesn’t talk openly about what happened in the past, but hints at violence and suffering. “I cannot go [back] to the village, and I don’t want to. I cannot forget what happened there. It took me many years to get ahead,” she says.

Avdic was one of the first women at Udružene when it started, and today she manages all the women, earning a good income.

“I feel like I’m finishing so many university [courses], and I feel so proud,” she says. “I couldn’t ever imagine having a bigger salary than my husband’s, [which I have now].”

Other women in Udružene also say they never imagined that knitting would be a source of income for them. Leijla, who did not give her last name, grew up in a rural area in the mountains. She moved to Sarajevo when she got married, but she says that after years of domestic abuse, she decided to divorce her husband and take her daughter. She had left school when she was 10, but she knew how to knit.

“When I got my first salary, I was so happy because I could invest in the education of my daughter,” she says.

Some months ago, Udružene conducted a survey asking women why they had joined the project. The answers were unexpected.

“I thought money was the first motivation, but it was not. It was because they can stay together and they have a feeling that they belong to something other than just a family,” Mingasson says, smiling broadly.

Indeed, although knitting can be seen as a solitary activity, for many of the women it’s not. It connects them and creates a community.

“I think that all the women here in Bosnia are victims of the civil war, so we don’t speak about politics or religion. We are here to be together, just as women,” Mingasson says.

However, difficulties remain – especially in regard to what she calls the women’s “state of mind.”

“They are stubborn and proud, but at the same time there is a lack of self-confidence. They are afraid to not be able to do something,” she says.

But Udružene is making headway with that challenge. “We insist, insist, and insist,” Mingasson says, “and they tell us that they are happy because they are learning a lot of things.”