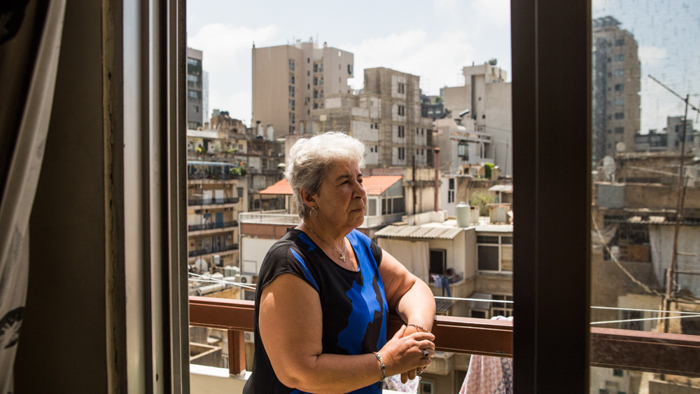 Syrian Women Seek the Truth About Their Missing Loved Ones

As Assad eyes victory in Syria’s brutal civil war, the fate of tens of thousands of disappeared citizens remains an unsettling mystery.

The last time Fadwa Mahmoud heard the voice of her son, Maher, she was bustling around the kitchen, cooking. She had planned to go to the airport to meet her husband, but had decided instead to stay home, in Damascus, and prepare lunch.

“‘We are in the car, we are coming. I’ve just picked up Dad at the airport,’ Maher told me,” said Fadwa, describing her phone conversation. “After a few minutes, I called him back. The phone was disconnected. It wasn’t until nighttime I realized they were detained.”

Today, Fadwa, 63, splits her time between Berlin, Germany, and Geitawi, a Greek Orthodox neighborhood in Beirut, Lebanon. She still wears a necklace given to her by her husband, and the torment of the last six years appears deeply etched in her face. Her son, Maher, and her husband, Abdulaziz Al-Kheir, disappeared on September 20, 2012, at the Damascus airport exit. She has no idea whether they are dead or alive.

In recent months, as the government of President Bashar al-Assad has regained control of much of Syria from opposition forces, attention has begun to shift to the displaced and the disappeared. In 2017, motivated by the fight of women’s movements such as the Mothers of Plaza de Mayo in Argentina, the Women in Black in Serbia, and the Families of the Disappeared in Algeria and Lebanon, Fadwa, together with other Syrian women, founded Families for Freedom, a grassroots movement that aims to give a voice to the relatives of the detainees and the disappeared. Led by women from affected families, and supported by three Syrian human-rights organizations—Women Now for Development, The Syria Campaign, and Dawlaty—the group hopes to reach the “sisters, sons, and people who believe in humanity” and who are disappointed by governments and international institutions, according to Bissan Fakih, the group’s communications officer.

The women, hailing from various regions of Syria, work mostly outside the war-torn country, in Lebanon, Germany, Belgium, Turkey, and the UK. They drive around European capitals in a rented bus adorned with photos of their missing relatives, trying to raise awareness, and will be holding memorials in a number of cities on August 30 to commemorate the International Day of the Disappeared.

“We are not political, we are not the opposition, and we are not loyalist. We are families, just families,” Fadwa said. “We want to know the fate of our relatives.”

“Our stance is against enforced disappearance and arbitrary detention by the Syrian regime and all parties involved in the conflict,” she explained.

Forced disappearances in Syria aren’t a new phenomenon. As Leen Hashem, Syria’s regional campaigner for Amnesty International, explained, they have been carried out since the 1970s and ’80s, starting under Bashar’s father, Hafez al-Assad, to silence political opponents. But, according to Hashem, “this issue became even worse after the conflict that started in 2011, so we are seeing hundreds of thousands of people being disappeared.”

Since the beginning of the protests in Syria, the Assad government has used forced disappearances as a punitive measure, targeting family members of defectors, activists, and resistance fighters, as well as those believed to be providing medical care to the opposition. According to the Syrian Network for Human Rights, an organization that works to document human-rights violations, more than 95,000 Syrians have been forcibly abducted. The vast majority of people (more than 81,000) have been detained by the Syrian regime, but armed dissident factions and extremist groups—such as Jabhat Fateh al-Sham and ISIS—have also made use of confinement and forced disappearances.

“Those people could be inside the regime’s detention centers or in secret jails and we’re not aware of their fate. Maybe some are being killed or tortured,” said Fadel Abdul Ghany, head of the Syrian Network for Human Rights.

Since the start of the civil war in 2011, more than 400,000 people have been killed, half the country’s population has been displaced (over 6 million internally), and thousands have been executed in just one facility, the Saydnaya prison, according to Amnesty International.

Fadwa, from an Alawite family just like Assad’s, is perfectly conscious of the brutal methods used in government jails. Arrested in 1992 for belonging to an opposition party, she served a 14-month sentence. Her husband, Abdulaziz, detained at the same time, spent the next 13 years in prison.

When he disappeared in 2012, Abdulaziz had been head of the banned Communist Labor Party and was a leading figure in the opposition group National Coordination Body for Democratic Change. He had been on a diplomatic visit in China to explore potential solutions to the civil war, and was coming back to participate in the Syria Salvation Conference, a dissident forum taking place in Damascus. He was guaranteed safe passage by Russia, China, and Iran—all allies of the Assad regime—according to Fadwa.

“I don’t know what they can possibly have accused him of. He never carried a weapon. He believed in nonviolence and in a peaceful resolution of the conflict,” she said. Fadwa is certain the Mukhabarat—Syrian military intelligence—played a role in her husband’s disappearance, though she said that the agency, which is closely aligned with Assad, denies it. She said concerns about her own safety caused her to leave Syria just a few months after Maher and Abdulaziz vanished.

Like Fadwa, other Families for Freedom members are still fighting for their right to know what happened to their loved ones. But the group is also a source of moral support for families pursuing legal action, particularly in Germany. In June, following a suit brought in Berlin on behalf of former Syrian prisoners, German prosecutors issued an international arrest warrant for Jamil Hassan, head of Syrian Air Force Intelligence, on charges of war crimes and crimes against humanity. Other charges against Hassan include “summary executions of political detainees,” according to Der Spiegel.

But Hassan remains free, as do most of the people behind the institutionalized violence, and regime change is not on the horizon. During his summit with United States President Donald Trump in Helsinki last month, Russian President Vladimir Putin called the war in Syria “the first showcase example of the successful joint work”—but success does not appear to include justice for the innocent people killed or disappeared in seven years of conflict. And, in the last few weeks, hundreds of Syrian families have found out that the government issued death certificates for their missing relatives, the majority of whom appear to have been hastily executed in state prisons, according to some of the relatives and reports by Families for Freedom.

To the families of the disappeared, this reveals how Assad managed to win—not just with military might, but also by demolishing the revolutionary spirit of activists and civilians. “We want to know,” said Noura Ghazi Safadi, a Syrian human-rights lawyer and a co-founder of Families for Freedom, “where are the bodies of all those who have disappeared?”

Ghazi’s husband, activist Bassel Khartabil, vanished after his arrest on October 3, 2015. In 2017, through networks of lawyers secretly working inside detention centers, she received confirmation that he died while detained. “We have many testimonies that most of the bodies have been burned. This means that any evidence of such crimes is destroyed,” she said.

But still, Ghazi’s work gives her hope: “It will be very hard to indict the offenders, but I believe that one day we will be able to bring all these people before a court.”