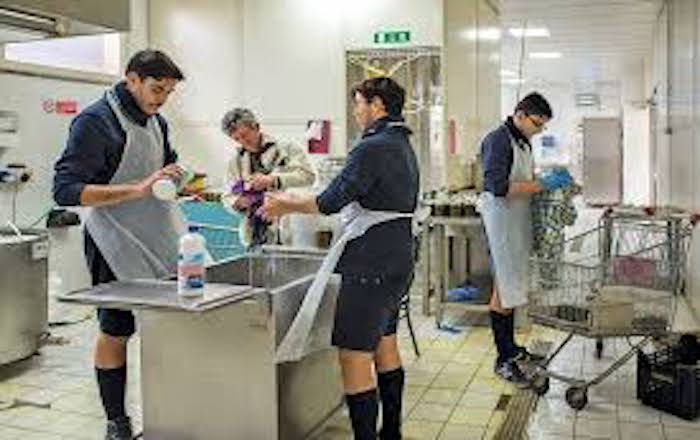 In Italy, how one cooperative is trying to counter the Mafia’s influence

The organization Beyond the Dreams provides a glimpse into Italy’s challenges, which on one hand are distinctive and yet resonate far beyond its borders.

The first time Simmaco Perillo arrived in the Italian hamlet of Maiano di Sessa Aurunca, everything around him was abandoned. The soil was untended, the house on the main estate was dilapidated, and a hayloft on the second floor of the house was crumbling. It was 2005, and nobody wanted to cultivate former Mafia land, he says.

“Everything was in ruins, but I saw the potential. We wanted to make a farm for the reintegration of disadvantaged people,” says Mr. Perillo, sitting in what is now a bright, renovated workspace. “The idea behind [it] was to restore dignity to disadvantaged people and empower them through work.”

Today, the social cooperative Al di là dei sogni, or Beyond the Dreams, is making pasta and growing organic vegetables on land that once belonged to the powerful Camorra Mafia.

The cooperative, run by Perillo, indeed works with disadvantaged individuals, including those recovering from addiction, former prisoners, and people who were released from public mental hospitals, to provide sustainable livelihoods and combat the influence of the Mafia.

After his first visit to the site, Perillo and others in the cooperative decided to try to acquire the land via an application to Sessa Aurunca, the hamlet’s municipality. They were able to do so thanks to national law 109/96, passed in 1996, which permits the social reuse of property confiscated from the criminal organizations.

The cooperative was granted the land, but threats and attacks were not long in coming. The 40-plus acres of land granted to the cooperative had belonged to Antonio Moccia, boss of the clan from the city of Afragola that’s part of the Camorra. The property had been seized by the Italian state in 1991 and transferred to the municipality in 1998, but nobody had had the courage to apply to use it.

“Fifteen days after the keys were handed to us, they [Mafia gangsters] arrived at night. They pulled down walls, broke through the windows, severed the electrical system, destroyed the plumbing. So we decided to sleep inside” to guard the property, Perillo recalls with a proud smile.

Despite the setting of several intimidating fires, among other tactics, the cooperative was able to set up a sustainable business. Today 32 people are members of the cooperative, and more than half are disadvantaged people. They produce organic “anti-Mafia” pasta, lentils, vegetables, and jams, and they receive a salary.

The organization receives some government funding but also has other revenue streams. Beyond the Dreams is part of a consortium involving five social cooperatives that work with disadvantaged and local people on lands confiscated from the Mafia. They sell agricultural products to clients throughout Italy that include fair-trade groups and organic shops. According to the consortium, its budget last year was €800,000 (more than $900,000).

Cooperatives that work on land confiscated from the Mafia provide important welfare services, says Tatiana Giannone, a member of the seized assets department of Libera, a national network of anti-Mafia associations. Moreover, she says, they have a symbolic and financial value in the fight against the Mafia.

“In an area where a land or a villa has been always identified with Mafia power, at some point [those assets] return to the community and the community becomes the owner. At the same time, [the cooperative] generates a new kind of economy – clean, ethical, and circular – that has disadvantaged people and communities at its core,” Ms. Giannone says.

The road that runs from the Via Domitiana to the east crosses marshy lands, bounded by the Garigliano River and the Roccamonfina natural park. Beyond the Dreams and its farm are surrounded by a landscape of admirable beauty, even with the clouds from its past.

“These are lands polluted because of decades of pesticides and toxic waste dumping by the Camorra,” says Sergio Nazzaro, a journalist and expert on the Mafia, pointing to a garden created by Beyond the Dreams. “That’s why it is important to educate children about nature and land”.

Inside a food-processing establishment, a group of volunteers fills boxes with organic products such as jars of eggplant and Buffalo sauce. “I’m from Scampia,” says Gaetano Paesano, referring to a crime-ridden district of northern Naples, as he loads a van with packages destined for outlets around Italy. “I grew up with the mentality of delinquency and violence.”

He was sentenced to 14 years in prison for international drug trafficking and alleged Mafia-related criminal conspiracy. “[Here] I came back to life because they gave me confidence and taught me kindness,” he says. Mr. Paesano arrived at the social cooperative in 2006 under a prisoner reentry pilot program. He started working at the warehouse and today is a member of the social cooperative. “My dream is to tell my story in prisons and to encourage others to change,” he adds.

Monica Beneduce, a social worker who works with members of the cooperative, stresses the efforts of the group: “It’s not a dream, it’s reality: a community based on equity and social justice where people with disabilities, deviances, mental problems, or addictions have regained their dignity.”