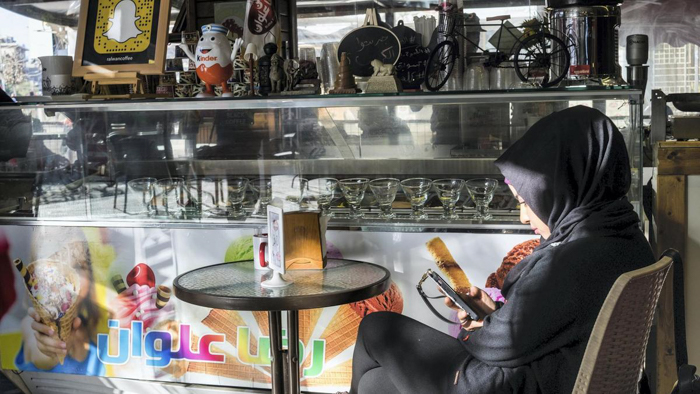 For some women in Baghdad, the written word is a weapon against social injustice

On a warm afternoon in early March, a group of female poets gathered in Ridha Alwan, a coffee house in Baghdad’s middle-class Karrada neighbourhood.

When Ridha Alwan first opened in the 1960s, it was the first café to serve roasted coffee in Baghdad. It has since become a bustling hub for the creative vanguard of the city’s political and cultural scene and a safe haven for women.

In a country where being female and having your work published rarely goes hand in hand, a fresh generation of women has chosen to overlook limiting social norms and instead follow in the footsteps of a long line of influential Iraqi female writers. For them, the written word serves to denounce social injustices in a society they regard as antiquated and conservative.

Today, Ridha Alwan visitors share books, organise debates and collective readings and discuss their dreams and passions as well as how to survive war, misogyny and grief.

“We met on social media three years ago,” explains Lamiaa Alnasiry, a 30-year-old poet with a nose piercing. “Then we started collaborations and collective publications.”

Sitting next to Lamiaa is Bida Ahmad – a jovial, flashy, middle-aged woman. Bida’s eyes are heavily made up, and she wears a python-skin jacket and a pink-orange hijab.

She lights a cigarette before she begins to speak: “This country stresses me out a lot.”

“I’m married but I’ve never met my true love. That’s why I started writing, to take refuge in love stories created by my imagination,” says Bida. “Now I feel free in my mind and my heart. The real problem in Iraq is the social pressure that takes away your freedom.”

Lamiaa nods in agreement: “if I were in prison I would have more freedom, because here we must always follow what the community wants, especially in love,” she says, her brow furrowed.

I was asked of which blood I am is a collection of poems written by Lamiaa, depicting the love between two women through a series of verses that are as romantic as they are tormented.

The young poet is adamant that everyone should be free to love whoever they want. “But we need a revolution to change the mentality of people, especially in Iraq,” she says banging a fist on the table.

For centuries the Arab world has been at the forefront of the literary world – Al Mutanabbi Street, in the heart of Baghdad, is the most vivid representation of Iraq’s love of the written word.

Filled with bookcases and roadside stalls, Al Mutanabbi dates back to Baghdad’s Abbasid era, between the 8th and 13th centuries.

Surrounded by ancient Ottoman architecture, it has long been the place for booksellers to ply their wares. Today it is one of the capital’s busiest streets. With an almost inexhaustible supply of books, Al Mutanabbi street has been the scene of the political and cultural shifts that have enveloped Iraq over the centuries.

In the 1950s most of the books available were Marxist writings. These were later replaced by writings that glorified Arab nationalism. Then, for more than 30 years, traders could only sell books that glorified Saddam Hussein and the Ba’athist ideology.

Iraqi poetry has always responded to an urgency to communicate and talk about social problems and current events, explains Elena Chiti, Postdoctoral Fellow at the Department of Culture Studies and Oriental Languages at the University of Oslo.

“Many Iraqi female poets, such as Nazik Al Mala’ika or more recently Dunya Mikhail, Amal El Juburi and Manal El Sheikh were not politicised … the most important thing for them was saying something,” says Dr Chiti.

“For example, writing about poverty, diseases, war, widows or other issues affecting Iraqi society. Today we find the same tradition with the younger female poets.”

This is true of Tamara Shaker, a 28-year old pharmacist in a health centre in the Al Nahrawan district south-east of Baghdad. Tamara’s novels and poems are inspired by everyday social problems.

“I hope to try to change and influence the society through writing,” she says. Tamara is disillusioned with a system of governance she feels belongs in the past. “There was a girl who wasn’t allowed to go to school and she dreamed of being a pharmacist, like me. I wrote her story because we need to tell these stories to change the mentality of our communities,” she says.

Her latest book Sleeping pain: five stories features controversial topics like paedophilia, honour killings, forced marriage and sexual violence. “My husband asked me why I wrote a story of a girl raped by her mother’s husband. I said these stories must be told,” she says.

As the coffee ground settles at the bottom of the poets’ cups, Tamara, Lamiaa and Bida are joined by writer and journalist Nawal Ali Alazzawi. She walks into the coffee house with a stack of newspapers under her arm.

Nawal, who works for a local daily newspaper, says: “The Iraqi government doesn’t care about its citizens and children. That’s why I wrote a book about children reduced to begging and poverty, which should not exist with the oil that we have.” Nawal says her hope is to amplify women’s voices.

“Women’s voices are oppressed in Iraq. It’s a shame, we have so many hidden talents that need to be heard and shown. Only in this way we can change Iraqi society. Or at least make an attempt to do so.”