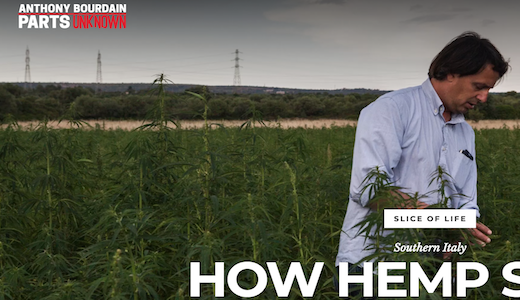 How hemp saved a steeltown

The road into Taranto is dotted with 100-year-old olive trees and low stone houses. The town, in the region of Puglia, is in the heel of the boot-shaped Italian peninsula. “The city between the two seas” straddles the southern Mediterranean, known as the Mar Grande, and a small inlet, known as the Mar Piccolo. The air has a heavy metallic scent.

At the edge of town is a farm that has been known since the 1800s for its traditional cheeses. People came from all over to buy dairy products handmade in ancient, wood-fired terra-cotta furnaces. Those days are long gone, the farm’s owner, Vincenzo Fornaro, explains.

In 2008 local officials forced Fornaro to cull his animals, which were no longer safe for human consumption. They were contaminated with a dangerous cocktail of nickel, lead, and other toxic substances. That was the end of the cheese. The culprit, just over a mile away, is the largest steel plant in Europe.

Fornaro was aware that the plant was spewing toxic chemicals into the air and soil. “I can see the effects of this horrible factory on me.” When he was 20, he had a kidney removed. He told Italian newspaper La Stampa that his mother died after being diagnosed with a tumor.

The Ilva steel plant covers 15 million square meters. It’s nearly three times the size of the city itself. It opened in 1965 and doubled in size by the 1970s. It once churned out almost one-third of Italy’s steel. The plant helped turn Taranto into a grimy industrial city. Smoking chimneys, blast furnaces, and aggregates yards now dominate the once pastoral town. Visitors are greeted with the sight of a large oil refinery and a huge cement factory.

The environmental effects of the plant have been devastating. One studyfound that 11,000 local residents died as a result of severe toxin poisoning in factory fallout from 2005 to 2012. High levels of lead and dioxins (carcinogenic compounds) were found in the urine and blood of locals who lived near the factory. They also had high rates of heart disease and cancer.

The dilemma is that the plant has dominated the local economy. At its height, it employed 40,000 people, and a European Union report found that the plant made up 75 percent of Taranto’s income in 2008.

Still, production at the plant has declined steadily, from 9 million tons at its height to 4.7 million tons in 2015. Unemployment in the region was almost 20 percent as recently as last year, so for many local residents, the steel jobs almost make up for the pollution.

Initially, the local government didn’t do anything about the health concerns because the plant was too economically important.

“A long time ago, a choice was made to sacrifice this part of Italy, jeopardizing the health of the citizens of Taranto and its community and the biodiversity of the two seas,” says politician Domenico Finiguerra. “It was decided to sacrifice this land in the name of Italy’s economic future, supplying its industry with all the steel it needed.”

Taranto represents an economic model based on cement, steel, and oil, which is no longer sustainable, Finiguerra says. “This poisoned territory urgently needs an ecological regeneration project.”

As the full scale of the environmental devastation became clear, local residents decided to take action. In 2012 magistrates seized the plant and placed it under special administration. Last year 47 people were indicted for charges including crimes against public safety, corruption, bribery, abuse of office, and murder and injury by negligence.

Among those indicted were the powerful owners of the plant, the Riva family, as well as managers at the factory and two politicians: the former governor of the region and a former mayor of the city of Taranto. Fabio Riva—a son of the plant’s owner—had been on the run since 2012 and had to be extradited from the United Kingdom. His billionaire father died in 2014, after two years of house arrest.

But the legal action came too late to save the agriculture sector, which had dominated the local economy before the steel plant came to town. The soil is contaminated, and farmers are banned from letting their animals graze within a 12-mile radius of the steel plant. Since 2012 about 1,000 enterprises have shut down, and there has been a 10 percent decrease in meat production due to the slaughtering of 1,000 animals in the area.

Which brings us to hemp.

“We found ourselves at a crossroads. We had to decide whether to leave or to stay,” says Fornaro. “We decided to stay to defend our land.” To do that, he turned to marijuana plants, which can absorb toxic substances from the soil and neutralize them. The first time hemp was used for environmental rehabilitation was after the 1986 nuclear disaster in Chernobyl, Ukraine.

“We started recovering our land using hemp,” Fornaro says proudly as he stands in a field, surrounded by chest-high cannabis plants. The 3-month-old crop is verdant and fragrant. The strong, sweet scent of marijuana coming from the 3-hectare field contrasts strongly with the fumes from the nearby steel plant, which still employs 14,000 people.

Fornaro started cultivating the controversial plant two years ago with the help of CanaPuglia, a local startup founded by hemp enthusiast Claudio Natile. “Hemp is a versatile plant with strong links to the Italian tradition, with thousands of properties, which over the years has been criminalized,” says Natile.

Hemp was a major Italian agricultural crop for hundreds of years. In the 1950s the country was the second-largest hemp producer in the world after the Soviet Union. Italian hemp seeds provided some of the most resistant fibers, which were turned into clothing. However, with industrialization and the advent of synthetic fibers such as nylon, hemp started to disappear.

Natile says part of CanaPuglia’s work is teaching people this history. “We went to the schools, spoke to the priests, to the farmers, and even the local military police to explain what we were going to use this plant for. The day we planted the seeds we invited all of them.”

Cultivating hemp is legal in Italy as long as farmers tell the police that they are planting it for industrial use and plant a legal variety with low levels of the mind-altering chemical THC. (Italy is currently considering legalizing recreational marijuana consumption.)

In just five years, hemp production in Puglia has increased from just 7.5 acres to 741, with about 100 farmers in the area planting seeds. It has even brought new investments to the region, such as the first hemp processing plant in southern Italy, which transforms the hemp into fiber for shoes, bags, clothes, and even bricks for construction.

Hemp seeds can be ground into high-protein, high-fiber, gluten-free flour that can be used for baking and making pasta. But most farmers in the region, like Fornaro, are planting hemp to help clear their land of toxins. Fornaro can sell plant fibers for processing because the toxins don’t show up in the plant itself, but he is not able to sell the seeds (to be ground into flour, for example) because they could be contaminated.

“We have to start giving back what we took from the environment and provide an alternative employment to our children,” says Fornaro. “For now we use hemp only for industrial processing. I hope in the future we can use it also for nourishment. But what is certain is that we will surround the Ilva plant with hemp.”

How hemp saved a steeltown