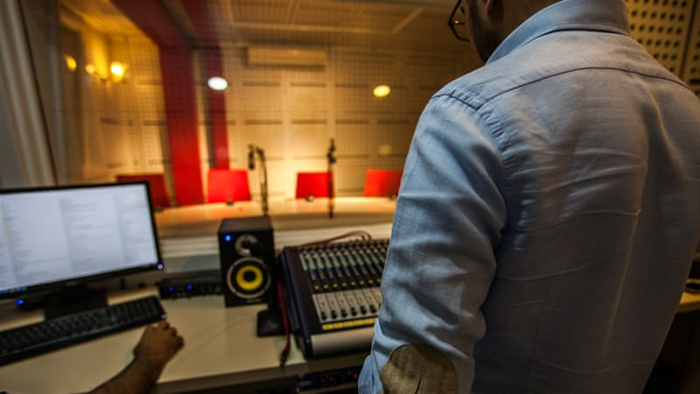 A local radio station in Qamishli, in northern Syria, is helping the community overcome the suffering they endured under Islamic State

QAMISHLI, Syria — In a tiny room on the fourth floor of an unplastered brick house, Gandy Khalidee talks to his listeners over the airwaves in Syria’s northeastern city of Qamishli.

“Three, two, one — on air,” said Khalidee, the presenter of radio station Voice of Nas (Voice of Knowledge in Kurdish; Voice of the People in Arabic), also known as Von FM. “Did you support the national team during the last soccer match against Iran?”

Khalidee was referring to the controversial match Sept. 5 where Syria scored the tying goal in the 93rd minute, advancing Syria’s team into a playoff that could lead to a berth in the 2018 World Cup. The last-minute goal gave Syrians a reason to celebrate amid a six-year civil war that has left hundreds of thousands of people dead. (Syria, however, later lost the playoff series to Australia.)

“Is it possible to have a national reconciliation? This is the topic for today. Call or write us on social media,” Khalidee continued.

Von FM, a local online radio station, is combating religious extremism by broaching taboo topics. Giwan Teter, Zana Omar and Khosma Qado — a Turkmen, a Kurd and an Arab, respectively — launched the station in May, following the defeat of the Islamic State (IS) in nearby towns. The three received the help of Media in Cooperation and Transition, a German nonprofit organization that trained them and provided financial support.

Omar told Al-Monitor that they first came up with the idea for Von FM in 2010, but that they could not safely launch the station until the tensions in nearby areas decreased. They finally had their chance after the Democratic Union Party (PYD) and its military wing, the People’s Protection Units (YPG), took full control in 2012 of a large portion of northern Syria.

According to the United Nations refugee agency, UNHCR, more than 5 million people have fled Syria since 2011, searching for safety in Lebanon, Turkey, Jordan and Europe. Some 6.3 million Syrians are internally displaced and, as war continues, the massacres committed against civilians persist.

“I decided to stay [in Qamishli] to help my people — especially those who suffered from harsh conditions during the war — by launching this station,” Omar said. “Now that [IS] is gone, we have to stand up to radical beliefs and help people return to their normal lives.”

Francesco Diasio, the secretary-general of the World Association of Community Radio Broadcasters, told Al-Monitor that local radio stations can have a major impact on society when there is freedom of the press.

Following the 2011 Arab uprisings, a significant number of independent news websites and local stations have been established in the Arab world. The overthrow of some regimes in the region provided citizens with the opportunity to be involved in grass-roots projects, such as local radio stations, and contributed to freedom of expression.

“Local or community radio stations — which are free from trade constraints and politically independent — foster dialogue and social cohesion among young people and open new spaces of freedom, especially in a country such as Syria that is battered by war and repression,” Diasio said.

Since its launch in May, Von FM has tackled social taboos, airing discussions on homosexuality and religious conversion. They have also broached the topic of sexually transmitted diseases and domestic violence, which were rarely debated in public until now.

“It is our duty to debate taboo issues. However, we need to be careful to try to broach the topics in a sensitive way,” Teter told Al-Monitor. “For example, if we talk about religious extremism, we will not point fingers at any religious group. This way we can raise awareness about the issue, which could help change someone’s extremist views in the future.”

The local station caters to some of Qamishli’s most marginalized demographic segments, such as women and youths.

Teter, a journalist, said that during the Kurds’ battle against IS, residents in Qamishli heard of the daily horrors of persecuted communities. Yet after IS was pushed out, those who suffered under the group’s brutal rule had few channels to share their stories.

“It is as if our society wanted to forget their suffering without facing the trauma of the war,” Teter said.

Von FM airs a show called “Hakaya” (“Stories” in Kurdish and Arabic) that follows the lives of people forced to live under IS rule. The show launched after Von FM partnered with Sinemfilm, a local film company in Qamishli that has also helped Von FM in producing a multimedia documentary titled “From Kojo to Raqqa,” which tells the story of a Yazidi woman who was kidnapped by IS in 2015 from the Sinjar Mountains.

“The YPG rescued her on the outskirts of Raqqa. In our video, she tells the story of what happened to her and how she is readjusting to daily life,” Teter said.

Von FM and Sinemfilm are producing a second documentary, which tells the story of former IS members, the grievances that motivated them to join the extremist group and the challenges of returning to normal life.

The radio station broadcasts a myriad of programs and documentaries both in Kurdish and Arabic for eight hours a day. This includes the program “Muu Evid” (“With Women” in Kurdish) that focuses on women-related topics; a music program covering traditional Kurdish songs; a humor show; a program called “Mojtamaa Online” (“Society Online” in Arabic) that focuses on issues related to religion, homosexuality and civil marriage; and “Tjareb” (“Experience” in Arabic), which covers extraordinary stories about people’s lives, such as Syrians who moved abroad and started a new life. Also, a program called “Sho Sayer?” (“What happened?” in Arabic) solicits listeners to express their frustrations on air. Some vent about the frequent electricity cuts, while others complain about diesel shortages and checkpoints erected by the PYD.

Since its inception, more and more people have been tuning into Von FM. Teter said the station receives between 15-20 calls from listeners during each program. “The number of listeners is increasing; they support us saying that we call attention to important and serious topics such as homosexuality. But others criticize the station for being too radical on certain issues,” he added.

Despite the challenges, Von FM is expanding its staff; In July, it trained 10 students, who are now employed by the station.

“We are educating them and giving them a small salary. This is [Von’s] approach to stop youths from taking the wrong road, while helping them become more open-minded and tolerant,” Teter said.