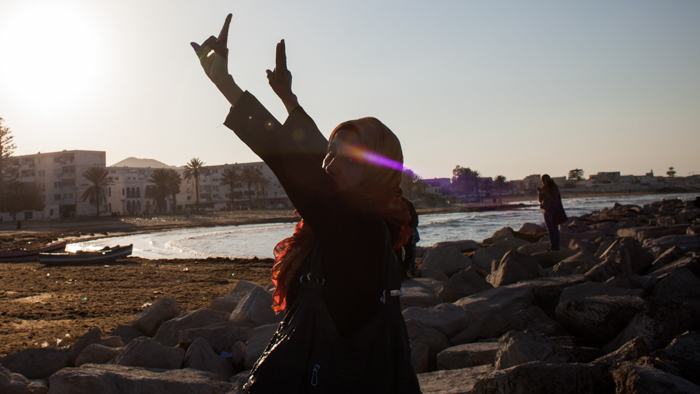 As the Jasmine revolution blossomed in 2011, many young Tunisians left for Europe in search of a better life, never to be seen, or heard from again.

On the road that leads north from Tunis to the costal town of Bizerte, Ouirtami sang a love song about a sensual woman and the passion of her lover who left for unknown lands.

Ouirtami’s husband left for Italy on March 29, 2011 with five other men from the small eastern village of Sidi Mansour, one of the shortest crossing points to the Italian island of Lampedusa just 186 kilometres away, between Tunisia and the island in Sicily.

For many who dreamed of Europe, had breathed the air of the 2011 revolution, wanted a better job and a new life, the distance is unimportant. But for Ouirtami and many like her, she’s had no news from her husband since the day he left.

“We are poor,” Ouirtami said matter-of-factly.

“My husband wanted to find a job and earn more money for our children, because they want to wear branded shoes, buy a new phone and all the things that young people look for,” she said dryly.

On December 17 2010, the self-immolation of Mohamed Bouazizi – a vegetable vendor and sole breadwinner for his family of seven – ignited national protests that led to the ousting of Tunisian President Zine El-Abidine Ben Ali and his regime weeks later.

The president officially resigned on January 14, 2011, after 28 days of protest, putting an end to his 23-year-long rule.

An intense campaign of civil resistance with street demonstrations made up the Tunisian uprising that became known as the Jasmine Revolution.

In that period of transition and chaos, police brutally repressed protests and tens of thousands of Tunisians embarked on journeys across the Mediterranean.

In this context, 29,685 Tunisian migrants were recorded entering Italy “irregularly” in 2011, according to the report by the Special Rapporteur François Crépeau, on migrants’ rights.

The majority of the crossings took place in the Spring of 2011, at the peak of the revolution when Tunisian police forces were otherwise occupied and coastal control was relatively weak.

Most of their mothers and wives never heard from them again, but others say they have recognised their missing,

“If he is dead, I will accept it. This is the will of God but the most important thing is to know what has happened [to him]. We don’t want anything – money or help – only the truth,” Souad Rouahi said with stubborn conviction as she sat in her son’s room, holding his clothes and the last photo of him in her hands. Today, years later, they are seeking the truth.

“They have to tell us where are our sons are. Today, with the technology, we can know if our children are alive or dead,” she said with determination.

Inside the bright living room of a simple house in Bizerte, Rouahi stand with two other mothers of those missing.

Together they cook couscous and others regional dishes and together they smile, despite the tragedy that they suffered. Both their sons left Tunisia the same night, April 29 2011, and both disappeared.

“They left without saying anything. We woke up in the morning and they were gone,” Faouzia Mrzaguia, the mother of Hamza, explained.

“They were, like the other young people, curious with the desire to know and travel.”

Over the next six years, the Tunisian families of those missing joined together, protested in front of the Italian Embassy and both the Social Affairs and the Interior Ministries asking for a truth and bilateral commission to investigate the fate of their missing family members.

They also founded several groups, including the Association for Research and the Disappeared, Supervision of Tunisian Prisoners to the Foreigner, La Terre Pour Tous (Land for All) and Mères des Disparus (Mothers of Missing).

Together they collect information, data and fingerprints to create a dossier detailing the names and the stories of all the men reported missing.

“It’s a huge pain not having a body to cry [over]. We see our children only in these portraits,” Mrzaguia said, clutching the photo of her son Hamza.

“I would like to burn down this border because this system of visas forces our children to travel in makeshift boats,” she said.

The associations have also partnered with Libera, an Italian anti-mafia association and started a joint-initiative called “Mediterranean Memory” that aims to raise awareness about those who have disappeared crossing the Mediterranean and the importance of naming them.

“We couldn’t ignore the voices of the victims who we are used to seeing every day in the news, detached from their stories and lands. They are not numbers, each of them has a story and a name,” Monica Usai, project manager of Libera International sector, explained.

Observers also noted that the gatherings of women were a significant step.

“This movement is a revolution and is revolutionary at the same time because they ask Europe to report on what happened and be accountable,” Federica Sossi, a professor at the University of Bergamo and expert of migration and memory, explained.

“On one side there is Europe, which spends large amounts of money on the security and control of the Mediterranean, and then on the other side there is a movement demanding for this knowledge to [be used to] determine where their loved ones are.”

On the road from Bizerte to El Aliyah village the landscape changes as the city opens up to expanses of olive groves and green, lush meadows.

The dirt roads throng with mules carrying branches and freshly harvested artichokes. Two women sit close to a small, smouldering fire, their hands rough from years of working the land.

“I’m the mother of Housemdine Jlili, who disappeared on May 5, 2011. Two days before his birthday, he would be nineteen,” one of the woman, named Ftiah, recalled.

“All I ask is compassion and the help to know what happened to our children. If my son is dead, at least tell me because my soul can finally find peace and calm.”

The son of Ftiah wasn’t poor or illiterate. He had an education, a job and a decent life in Tunisia but still she said he always dreamed of traveling to Europe. He was one of the millions around the world who cannot exercise the right to free movement because of the nationality in their passport.

Imed Soltani, founder of the Land for all association pointed out that “when you don’t have legal means to travel and it is almost impossible to get a visa, the only alternative is to pay a trafficker or smuggler.”

Soltani explained that the very system of borders breeds the dangerous alternatives.

“This smuggler is the product of the system and of the protectionism of borders that cause this demand for illegal [systems]. So, governments have the duty to investigate and tell the families what happened to their loved ones.”

For the last two years, the Tunisian government has run a small commission, but a constantly shifting political situation after the revolution hampered work.

On February 23 2017, the Tunisian commission met with Vittorio Piscitelli, Special Commissioner of the Italian Government for Missing Persons, and agreed to create a mixed technical and scientific commission charged with collating the information gathered by the two governments.

However, the mothers are not satisfied.

They say it excluded them and their lawyers from the process and they claimed the Tunisian state’s records of the missing were “lax”.

What they continue to ask for is a replacement that includes experts and the families of the victims.

“We are not accusing Italy. We accuse the European governments that have closed their borders. We call for a bilateral commission with our lawyers and representatives to investigate,” Rouahi said.

“We also ask the exhumation of the unnamed bodies buried in Lampedusa in order to give a name to those men buried in your land without them.”