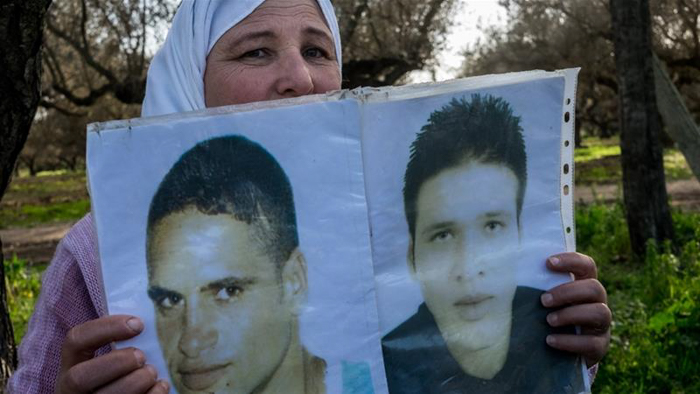 Hundreds of Tunisian men have disappeared while attempting to cross the Mediterranean Sea towards Italy.

Tunis – In a modest, but bright, two-storey apartment in the Tunisian town of Bizerte, a group of women sit on a couch, waiting.

In their hands, they clutch photos of their children and husbands, who left home six years ago in search of a better life in Europe. These mothers and wives will not stop searching, hoping to find justice for their loved ones who disappeared off Tunisia’s Mediterranean coast.

“What we want is the truth,” says Souad Rouahi, whose son, Ben Ibrahim, has been missing since April 2011. “If our children are dead, we accept it; it’s the will of God. But we want to have a guarantee, an investigation by the Tunisian and Italian governments and the exhumation of nameless corpses buried in the Italian cemeteries,” Rouahi tells Al Jazeera.

Her two friends, Faouzia and Jamila, look on supportively as she speaks. Their family members disappeared on the same day.

The distance from Sfax, a harbour town on the eastern Tunisian coast, to the Italian island of Lampedusa is less than 200km, but it is a path fraught with danger.

During the days of Tunisia’s 2011 revolution, many boats departed from the country’s coast daily, filled with young men fleeing poverty. In that period of transition and chaos, as police brutally repressed protests, nearly 30,000 Tunisians crossed the Mediterranean Sea to enter Italy, according to the Italian NGO Migration Policy Centre.

Most of the crossings took place in the spring of 2011, at the peak of the uprising, as Tunisian police forces were otherwise occupied and coastal control was relatively weak.

But hundreds more young Tunisian men disappeared while attempting the crossing. Official figures are unavailable, but a group of Tunisian mothers have amassed a dossier of more than 500 names. Some believe their sons drowned after their boats capsized.

For the past six years, these women have lobbied for a commission of inquiry into the disappearances, including their own testimonies.

The Tunisian government already has a small government-run commission that has been pressing Italian authorities to investigate further – but the women say the process has been slow and inefficient.

They are calling for a broader inquiry, bringing together officials and victims’ families to establish the facts surrounding the hundreds of disappearances.

The Tunisian government did not respond to Al Jazeera’s request for comment on the matter.

Although most of the mothers and wives in this group have received no news over the past six years, some believe their loved ones eventually reached Italy, claiming to have seen their image on television or in newspaper reports. Many cite conflicting versions of events from the Italian coastguard.

In one case, the husband of Lobna Jlassi, a 33-year-old mother of five, departed in November 2012 with three friends from Ezzahra, near the capital Tunis, in a boat stolen from the Tunisian navy. Jlassi says that she received a call from her husband, Nabil, when the group was about 40km from Pantelleria, an Italian island in the Strait of Sicily. He was asking for help as their boat was sinking.

Jlassi called the Tunisian coastguard, while her sister-in-law, who lives in France, contacted the Italian coastguard and asked them to check on the men.

“[The Italian coastguard] said that they were fine, and that Nabil was with another Tunisian man on the same boat … We were very happy,” Jlassi told Al Jazeera.

The Tunisian coastguard did not initially respond, but contacted Jlassi a few days later, asking for information about her husband – including when he left Tunisia, from what area and in what boat.

“I started to be worried, so with my brother, we called the Italian coastguard [again] and they said that Nabil was not there [in the coastguard’s custody]. I told them what my sister-in-law said to me, but they said it was not true,” she recalled.

Jlassi’s brother managed to speak with some Italian fishermen, who confirmed that they had seen four Tunisians who appeared to be in trouble off the coast of Pantelleria that night, and they had called the Italian coastguard. But that is where the trail ends.

For the past six, long years, the Tunisian women affected by these disappearances have collected as much data and information as possible on the missing men, while also holding a series of protests to criticise the response from Tunisian and Italian authorities.

“The Tunisian state should do everything it can to tell the families if their children are alive or dead,” mother Aissa Halima said during a February sit-in outside the Italian embassy in Tunis. “[But] also Europe and its governments have to assume a responsibility, because they have closed European borders, forcing our children to choose the boats of death.

“Why does no one care about them?” Halima asked. “Why don’t the Italian and Tunisian governments talk about it?”

This year, the Tunisian committee investigating the cases of nationals reported missing in the Mediterranean travelled to Rome to meet Vittorio Piscitelli, the Italian special commissioner for missing persons. Together, they agreed on a new initiative that would involve comparing the information gathered by the Italian and Tunisian coastguards with that collected by the Italian government.

But the mothers and their representatives, who were still excluded from the process, said it was not enough.

“It’s absurd that families and their lawyers were excluded from the meeting and from the technical commission,” Federica Sossi, a professor at the University of Bergamo with expertise in asylum seekers, told Al Jazeera. “If they were French, Italian or European mothers who lost 500 children [in Tunisia], they could go there to search for them – but for these mothers, it is impossible due to the migration policies.”

In partnership with Libera, an Italian anti-mafia association, the mothers of the missing Tunisians in late 2015 launched a joint initiative called Mediterranean Memory, aiming to raise awareness about the victims of sea crossings and the importance of naming them.

“We couldn’t ignore the voices of the victims … They are not numbers. Each of them has a story and a name,” Libera project manager Monica Usai told Al Jazeera.

Meanwhile, in el-Aziz, a rural village several kilometres from Bizerte, two women sit surrounded by blooming olive groves and almond trees, holding photos of their missing sons. Fthia Jljli’s son, Housemdine, disappeared in May 2011, and her husband later travelled to Italy to search for the young man, without success.

“My son was good economically, he had a job and a car, but he wanted to see Europe. It was his dream. Why is it so difficult for a Tunisian to reach [Europe]?” Jljli asks in a soft, calm tone. “We will continue our struggle, not only for us, but also for other mothers – because any mother could feel this grief.”