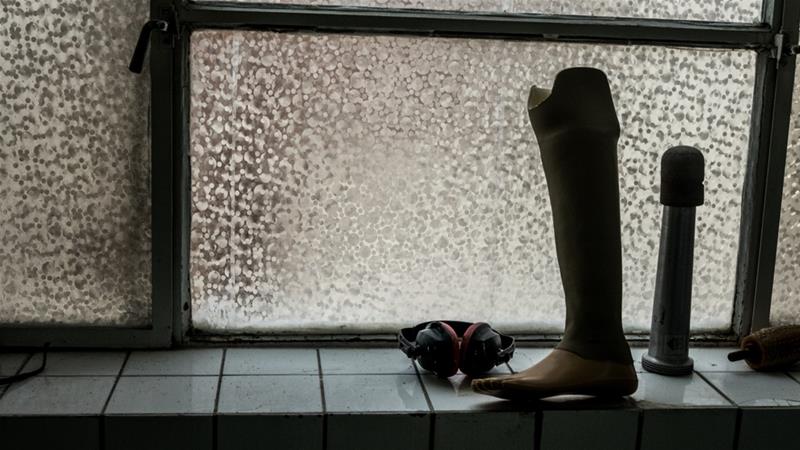 Getting Iraq’s war victims back on their feet

Sulaimania, Iraq – By a covered garden inside a quiet courtyard with white central columns, several small workshops are tucked away.

“We have a lot of artists in this centre,” explained Hawar Mustafa, a man with a moustache and a gentle face who co-founded the Teresa Rehabilitation Centre two decades ago. “Here, they create, produce and modify prosthetic [limbs].”

The centre in Sulaimania, a city in Iraq’s northern Kurdish region, helps to support victims of war with assistance from an Italian NGO, Emergency, that offers free medical and surgical treatment. It has become an even more critical resource in recent months as Iraq ramps up its battle against the Islamic State of Iraq and the Levant (ISIL, also known as ISIS), focusing on the group’s last urban stronghold of Mosul.

Inside the centre, victims of landmines and other explosive devices undergo rehabilitation and physiotherapy. Within the same facility, a team of craftsmen – most of them mine victims themselves – produce prostheses tailor-made for the centre’s patients.

In one room off the central courtyard, models for prosthetics are designed; in another, a lathe is used to reshape plaster casts into new upper or lower limbs.

“The idea behind this project is to teach another trade to people who lost legs or an arm and cannot do their previous job,” Mustafa told Al Jazeera, noting that the centre was launched during the Iraqi Kurdish Civil War in the mid-1990s.

“At that time, there were a lot of landmines, bullets and victims of war who had lost their legs and arms, so we thought to make prostheses for those people,” he said. “But when we started the production, after a while, we realised that they were not enough … We had to give them the possibility to start a new life. If he or she was a farmer and lost a leg, he or she has to learn another job.”

For this reason, patients at the centre also benefit from vocational training in areas such as carpentry, tailoring and electrical engineering. For five months, they attend classes with master craftsmen who teach them a new vocation; at the end, they are given help and support to open a small shop or artisanal store.

Suad Mahmud Nasir, 45, who lost a hand and an eye from a landmine explosion in 1988, says the centre helped her to launch a career as a seamstress making traditional Kurdish clothing, with international success.

“I get orders from [Kurdish people living in] the UK, Norway and other European countries,” Nasir told Al Jazeera. “I got a good income, I bought a car and I redecorated my house.”

In some cases, patients have teamed up to open new businesses. Since its launch in 1995, around 300 cooperatives and small enterprises have been opened with the centre’s support. In the most serious cases of disability, “income generation projects” provide people in rural areas with livestock or help city-dwellers to open small stores, such as mobile phone shops.

“If someone stays at home, they will become more depressed, and we believe that we have to give everyone the chance to start a new life,” Mustafa said.

As Iraq continues its fight to oust ISIL from Mosul, contributing to the country’s massive displacement crisis, the centre has received a new wave of patients.

Khatoum, a Yazidi woman from Shingal who fled ISIL’s advance in the Sinjar regionin 2014, is among those who have recently sought help. During the family’s flight from ISIL, Khatoum’s daughter fell and injured her spine, paralysing her; many other relatives died in the conflict.

“It was very hard. We lost many things. My sister saw all her children dying,” said Khatoum as she sat by a sewing machine. She was accepted into the tailoring training workshop because she is now one of the only members of her family able to work and generate an income.

Another war victim, Ziad, who lost a foot during a US bombardment near Baghdad in 2006, was forced to flee to Iraq’s Kurdish region after ISIL’s 2014 invasion. At Ashti camp, he met staff from the Teresa Rehabilitation Centre who offered him a chance to attend a training course.

“I’m happy about the training, because I’m learning a new job and in the future I can have my own business,” Ziad said as he fiddled with an electrical outlet inside one of the centre’s workshops.

As the Mosul offensive grinds on, with ISIL using hidden improvised explosive devices and other booby traps to hinder the Iraqi army’s advances, staff at the centre expect to see more victims in the days and months ahead.

“Unfortunately, this is a long-term war,” Mustafa said. “But our doors are open for everyone in need.”