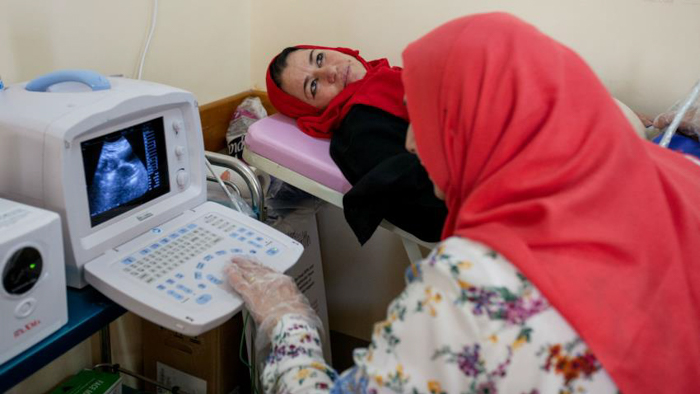 In-depth: A Muslim doctor and a Christian nurse have come together to help women in desperate need of medical and gynecological treatment, reports Sara Manisera.

Ashti is the Kurdish word for peace. It’s also the name of a brightly painted two-storey clinic, packed with women waiting to see the gynecologist.
Other than a few posters in the waiting room warning against child marriage, drawings of nursing mothers liven up the peeling paint. A bird escaping from its cage is painted on another wall, symbolising regained freedom.

Heavily pregnant women sit with elderly relatives. Other women chase their children who run through the corridors. While some wear an abaya, or floral hijabs, others sit unveiled, their heads bare.

All were waiting for the door to open and to be called in to see Doctor Huda, the only gynecologist in the Ashti Reproductive and Health Centre here in Erbil, the capital of Iraq’s Kurdistan region – just 50 miles from Mosul, where a fierce battle is underway to rout the Islamic State group from Iraq’s second-largest city.

Dr Huda wears a white medical coat and a bright coral-coloured hijab that lights up her face.

Behind a privacy screen, she performs an ultrasound scan upon a pregnant woman using a new machine. Beside her, sitting at a desk, is Rawnaq – a younger nurse who takes notes, files forms and prepares medicines.

Huda, a Sunni Muslim, and Rawnaq, an Assyrian Christian, both fled their homes in Mosul when militants from the Islamic State group captured the city as it overran swathes of Iraq in June 2014. Both medical practitioners, like many of the women they treat, are internally displaced people.

The pair set up this clinic together. Every day they tend to the needs of dozens of women fleeing from the war in Syria or from the Iraqi provinces controlled by IS.

The Ashti clinic is one of four centres for reproductive health and psychosocial support in Iraqi Kurdistan that allows Syrian, Iraqi and Kurdish women to access medical and gynecological check-ups free of charge.

This was only made possible thanks to funding from an Italian NGO, Un Ponte Per, a volunteer association set up following the 1991 Gulf War.

“They told me it was free and I came,” Fida, a pregnant 16-year-old Syrian, told The New Arab. “We are a big family and I thought that getting married was a good idea because of the war.”

Saha, an Iraqi women who fled Mosul two years ago, is now expecting her fourth child.

“My neighbours told me about the clinic, and I came,” the young woman said, rubbing her belly.

The war raging across Iraq and neighbouring Syria has had a huge impact on women; many are now in dire and desperate need of assistance.

The thousands and thousands of Syrian refugees fleeing to the relative safety of the semi-autonomous Iraqi Kurdistan region has brought the local health system to the point of collapse.

“Few families can afford to pay a doctor and often women are the most disadvantaged,” said Diana Kako, a social worker with a local NGO named Al Mesalla, which works with women in Kurdistan.

The most common issues stem from infections, numerous back-to-back pregnancies and child marriages. The husbands, social workers report, have become more violent, frustrated – and there are many cases of marital rape.

“I’m Muslim and I’m against abortion, but I think each woman should be allowed to protect her health,” says Dr Huda. “Having twelve, thirteen children without medical supervision and programming is risky – but this is a problem in our country because men usually decide everything.”

Huda graduated in medicine from the University of Mosul in 1987, and then specialised in gynecology. “I love my job, it’s my entire life, but now it is very complicated,” she says. “We doctors are few, and there are many women in need.”

Huda had spent her entire career working in Mosul’s public hospital – until June 2014, when she fled with her husband and children to Erbil. “I could never imagine that my life would change in this way. It’s difficult leaving your family, your house, your job.

“My family is still inside Mosul. They live in a traumatic condition. They cannot go out, they are absolutely terrified. I’m worried for their life and I fear that the situation will be worse after the liberation. This war will set the population against each other.”

When Huda speaks about her family, her voice becomes fragile and her eyes fill with tears. She holds them back.

“It’s hard to predict the future right now. Only God knows what will happen.”

Huda and Rawnaq glance towards each other at this mention of the divine. Their difference of religion does not matter in this special place.

“In this war, we are all victims,” says Rawnaq. “We both fled and we both lost everything, just like the women we see every day. We don’t have any problems working together. In Mosul we were used to religious diversity. I have always celebrated Christmas with my Muslim neighbours.”

Rawnaq fled with her family from Mosul but she has still friends trapped in the city.

“It’s very difficult to talk with those who are in Mosul. They have to be careful to use their phones, especially now as Daesh became even more cruel.”

Gynecological exams continue seemingly without pause. Each time the door to the waiting room opens, there are four or five more women begging to be seen.

Despite the many daily difficulties, Rawnaq wants to share her story of working with Huda.

“We are refugees but we are lucky,” she tells us. “We have a job and I’m learning a lot from Huda – and even if, sometimes it is painful, especially when you heard patients’ stories and the violence they have suffered and survived.

“We are here for them and we must be strong.”