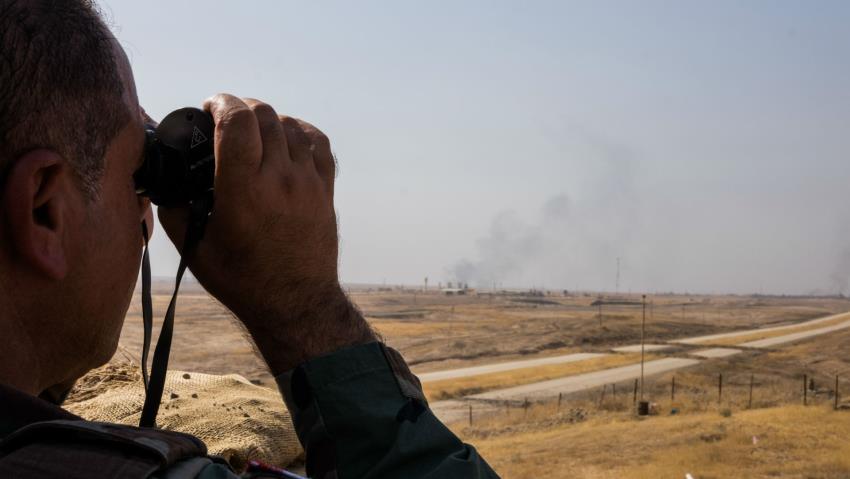 In an exclusive interview, Major-General Fadhil Jalil al-Barwari, the chief of Iraq’s ‘Golden Division’ forces, tells The New Arab how the offensive is being led.

Iraq’s counter-terrorism unit, the Golden Division, is something of a rare outfit in the country’s armed forces.

Not only is the US-trained special forces unit considered to be one of Iraq’s most effective, but it is also made up of members from across the country’s fraught religious and ethnic lines.

Kurds and Arabs, Shia and Sunnis, all live, eat and fight together. Now they are on the front lines, on the outskirts of Mosul, starting to take on the Islamic State group.

Given their reputation, they will likely be among the first to penetrate IS defences to enter Mosul, after Peshmerga Kurdish forces liberate the outskirts of the city.

Early on Monday morning, the offensive to retake Iraq’s second largest city began. Peshmerga forces moved in from the “Khazir front line” and took control of several villages from the Islamic State group. However, the battle is likely to be long and it is not clear when troops will actually enter the city itself.

Among the concerns for Golden Division commander Major-General Fadhil Jalil al-Barwari is the fate of more than a millions civilians still trapped inside Mosul. Military planners have had to take their presence into account, and they will undoubtedly be affected by the fighting.

IS is reportedly using locals as human shields, and there is a fear among military brass that the militants might indiscriminantly deploy chemical weapons when troops enter the city.

The UN said that the operation in Mosul is likely to be cause the single largest and most complex humanitarian catastrophe in the world this year, even eclipsing Aleppo.

In an exclusive interview with The New Arab, Major-General Fadhil Jalil al-Barwari explained how the offensive will be led.

What is the military strategy to retake Mosul?

Barwari: The offensive will be conducted simultaneously by land and by air. We cannot perform the offensive without the use and the protection from airstrikes.

Only with the support of the international coalition can we easily enter Mosul. The first to start the offensive are the Peshmerga and Zaravani forces that will liberate the villages on the outskirts of Mosul.

We will come only at the second stage [of operations]. However, we will be the first forces to enter inside the city.

When do you think you will enter Mosul city?

We don’t know exactly when the liberation will be. It depends on what happens on the ground. Maybe we will face some obstacles, maybe it will be easy.

It depends on the presence of bombs, mines and how the jihadists will respond to the offensive. Only the situation on the ground will decide the timing.

Will you allow Shia militias to enter inside Mosul?

We will not allow, in any way, the Shia militias to get inside Mosul. They are 30 kilometres away from the city. We don’t want to repeat the same mistake of Ramadi.

Today, we have more experience and we have gathered all the information necessary for the attack without affecting the population. Our goal is to protect civilians.

Will you leave open some corridors to allow Islamic State group fighters to leave Mosul?

The corridors have already been opened to allow Daesh [IS] escaping from Mosul. There are two roads open to go to Syria: one is through Tall Affar and the other is through al-Biaaj.

How do you expect to govern Mosul after its liberation, and what future are you imagining for Iraq?

As a military leader I cannot give a precise answer. We do our duty and I hope that the political forces will do the same. It’s a political task.

However, we know that this is a problem – but we hope that all the forces are doing their best to solve the problem of governability between all the communities.

In Mosul there are Kurds, Turkmen, Shabak, Shia, and of course Sunnis.

Our fear is that the young generation have been influenced and brainwashed by a terrorist mentality in these past two years [of IS occupation]. This will be the greatest impediment: eradicating this mentality.

To do that we have to re-educate the young people to co-existence.

Do you think that people inside Mosul will welcome you?

We think so, because they suffered too much under Daesh [IS]. Just a few days ago, 58 people were slaughtered because they were considered spies of the Iraqi armed forces.

The population is ready and they are just waiting for the liberation.