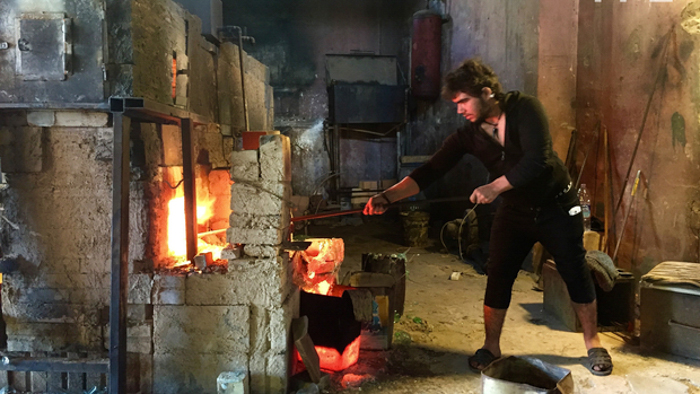 Tucked away under the shade of pomegranate and orange trees, an old forge still produces glass in a furnace that dates back 2,000 years

There are places where time seems to stands still. The coastal village of Sarafand, 60km south of the Lebanese capital Beirut, is one of them. This bustling port town, where fruit is still stacked in wooden crates and chickens roam the winding streets, is home to the last dynasty of glass blowers in Lebanon.

The Khalifeh family have, for generations, handed down techniques and secrets, tools and artistic methods. However, cheap imports of glass and declining interest in the old methods nearly drove the Khalifeh family forge out of business, until a new environmental initiative breathed new life into the old craft.

For the Khalifeh family, glass blowing is in their blood. Tucked away in a courtyard, under the shade of pomegranate and orange trees, their old forge still produces glass in a furnace that dates back 2,000 years to Phoenician times. The origin of glass making is shrouded in mystery and steeped in legend.

“It is a trade that has been passed from father to son for centuries. Everyone in my family does this job and started as a child, around the age of 11,” said Nesrine Khalifeh, the niece of workshop master Hussein Khalifeh. “Before the construction of the highway, there were more tourists and more people passing in front of our workshop, so we worked more. Glass production was an important source of income for our entire family, but now it is very difficult to survive.”

The discovery of glass-blowing technique

According to Maha Almasri, archaeologist and expert on glass and ceramics at the Lebanese University in Saida, “Glass was invented in either Sumeria or Egypt, but its full development was accomplished in Egypt around 4000 BC.”

But it was the Phoenicians, around 50 BC, who revolutionised glasswork when they introduced the blowpipe technique. This allowed the creation of an unlimited number of shapes and objects and sped up the production, lowering costs.

“Before the discovery of the glass-blowing technique, glass was used to make bracelets, necklaces, jewellery and non-transparent beads. With this invention, the Phoenicians began to produce bottles, glasses, vessels, vases, goblets and other containers for domestic use,” explained Almasri. “As a result, several workshops and commercial centres were born in the area, and this led to the development of a local economy based on the production and trade of these artefacts,” she explained.

Phoenicians, who are famed for being great mariners and merchants, spread this technique throughout the Mediterranean. Glass-making workshops in Sidon established themselves among the most renowned in the region. The new practice then spread through the Roman Empire, laying the foundations for what was to become one of the most illustrious centres for glass blowing in Europe in Murano, Italy.

What happened with modern methods?

Today, however, with industrialisation, glass is being mass-produced at much lower costs than by hand blowers. This has put a huge economic strain on the traditional craft and many have gone out of business. The Khalifeh family too almost closed their forge for good. “We almost had to close our workshop because we were not getting enough orders and our production costs are much higher compared with industrial products, since everything is handmade,” said Hussein. As Richard Setters explores in his book The Craftsman, the implications of industrialisation for artisans show how “machines, created for large-scale production, gradually threatened the standing of the most skilled labourers and increased the number of semi or unskilled workers,” leading to the disappearance of such traditional and ancient professions.

Glass and recycling joined in a single art form

With few sales and close to bankruptcy, Hussein Khalifeh was struggling to find a way to keep the family’s artisan business going. Today, the Khalifeh family has started recycling glass, which they melt in their furnaces to be remoulded. This initiative was set up by Ziad Abichaker, CEO and founder of Cedar Environmental, a Lebanese recycling company.

He developed a project in 2012 called Green Glass Recycling Initiative Lebanon (GGRIL) with an environmental engineer, based on a zero-waste philosophy. He would collect green and brown bottles before they went to landfill sites and take them to the Khalifeh family to be reshaped.

Abichaker assisted the family in designing a new line with a modern style, while Nesrine Khalifeh started to paint and decorate the vases, carafes and cups. This helped them to sell their new unique items in boutique shops and find a new market.

The secrets of glass blowing

From the ancient Phoenician furnace, 18-year-old apprentice Ali Khalifeh pulls out a glowing ball of molten glass using a long, hollow, metal rod. He lifts the tube to his lips and begins to blow air into the molten mass, just pulled from the oven, creating a glowing bubble. After a few seconds, he slowly rotates the pole to create a bulbous shape. A second blowing shapes the red-hot material. He then inserts it into an old cast iron mould and finally the object is detached from the metal bar. At this point, master craftsman Hussein grabs the newly formed glass with a large pair of pliers, shaping it with a loud iron machine that cuts away the excess parts. After that it is baked for a second time at a lower temperature to solidify the new glass.

This is a painstaking and delicate process requiring great skill to manage the heat and calibrate temperatures with the ambient air. At the initial stage, the piece can be forged and moulded because it is hot, but there is the risk that it will crystallise with an imperfection. For this reason, learning to blow the glass requires a lot of experience and years of practice.

“In order to mould one single piece, you need a minimum of 15 minutes, but to create good quality artefacts, you need years of experience. Most of the time, objects come out with imperfections and not with the desired shape, so we [have to] melt the glass again,” said master craftsman Hussein.

This ancient technique, together with the experience and skill of the craftsmen, can make unique and original glass masterpieces.

“The glass artisan is a historical profession midway between craftsman and artist,” explained Carmen Vanin, head of the world-renowned glass crafting school of Abate Zanetti, founded in 1862 in the famous glass island of Murano near Venice. “[The artisan] should possess strong creative skills and dexterity combined with solid artistic training. It is a very challenging activity that needs passion and precision,” Vanin explained.

Out of waste crisis – a solution

Waste management is a major problem in Lebanon; throughout the summer of 2015 protests rocked the Lebanese capital when garbage filled the streets.

Glass is one aspect of this issue. “In the 2006 war, Israeli air strikes destroyed the only glass manufacturing and recycling plant in Lebanon, which produced green glass bottles for local industries and recycled glass sorted from the garbage,” said Abichaker. “So, after the war, there was no one able to do it.” This led local companies to import their bottles from abroad. With no means for recycling, millions ended up in landfills or uncontrolled dumps.

“That was when I thought up GGRIL. I knew that the glassblowing artisans were close to bankruptcy and we had to find a way to recycle Lebanon’s used beer bottles. So I proposed to Khalifeh to develop a line of crafted products like lamps, glasses, vases, cups with a nice design,” said Abichaker.

Through this project also, the Khalifeh family recently coordinated with Almaza, Lebanon’s largest brewery, to recover 17 millions green beer bottles and turn them into glasses. This allowed them to work non-stop for four months without ever turning off the furnaces. The glasses were given away with promotional packs of beer.

“Fixed costs are high. Just to heat the oven to the temperature required to melt glass costs $500. As well, it is all made by hand, so we cannot compete with products imported from China,” said Hussein Khalifeh. The Index Mundi records an increase in glass imports to Lebanon from $45mn in 2005 to $115mn in 2011.

The consequences of these imports on ancient artisans like the Khalifas is their marginalisation in the economy and the great difficulty in finding a steady source of income. Without support, there is a real risk of these traditional trades disappearing.

Thankfully projects like GGRIL are, for now, keeping this invaluable tradition alive and preserving an important Lebanese cultural heritage.