In northern Syria, the PYD, an offshoot of the PKK, is propagating nothing less than the construction of a new society. But will this brand of democratic confederalism work in practice?

In the early hours of a September morning, the temperature has already risen to almost 40 degrees at Faysh Khabur, a checkpoint on the border between Kurdish Iraq and northern Syria. The three-hour drive from Erbil, capital of the semi-autonomous Kurdish region of Iraq, passes through the town of Dohuk. It’s a city that, like much of the Kurdish region, has grown sprawling suburbs of tall concrete blocks that interrupt views of the rolling plains.

At the point close to where the borders of Iraq, Syria and Turkey meet, hundreds of families sit in the shade of sheet metal awnings, waiting to validate their papers to cross into Iraqi Kurdistan. It has taken weeks for them to get the required permission to cross the frontier into war-torn Syria, at a border only recently opened to journalists. 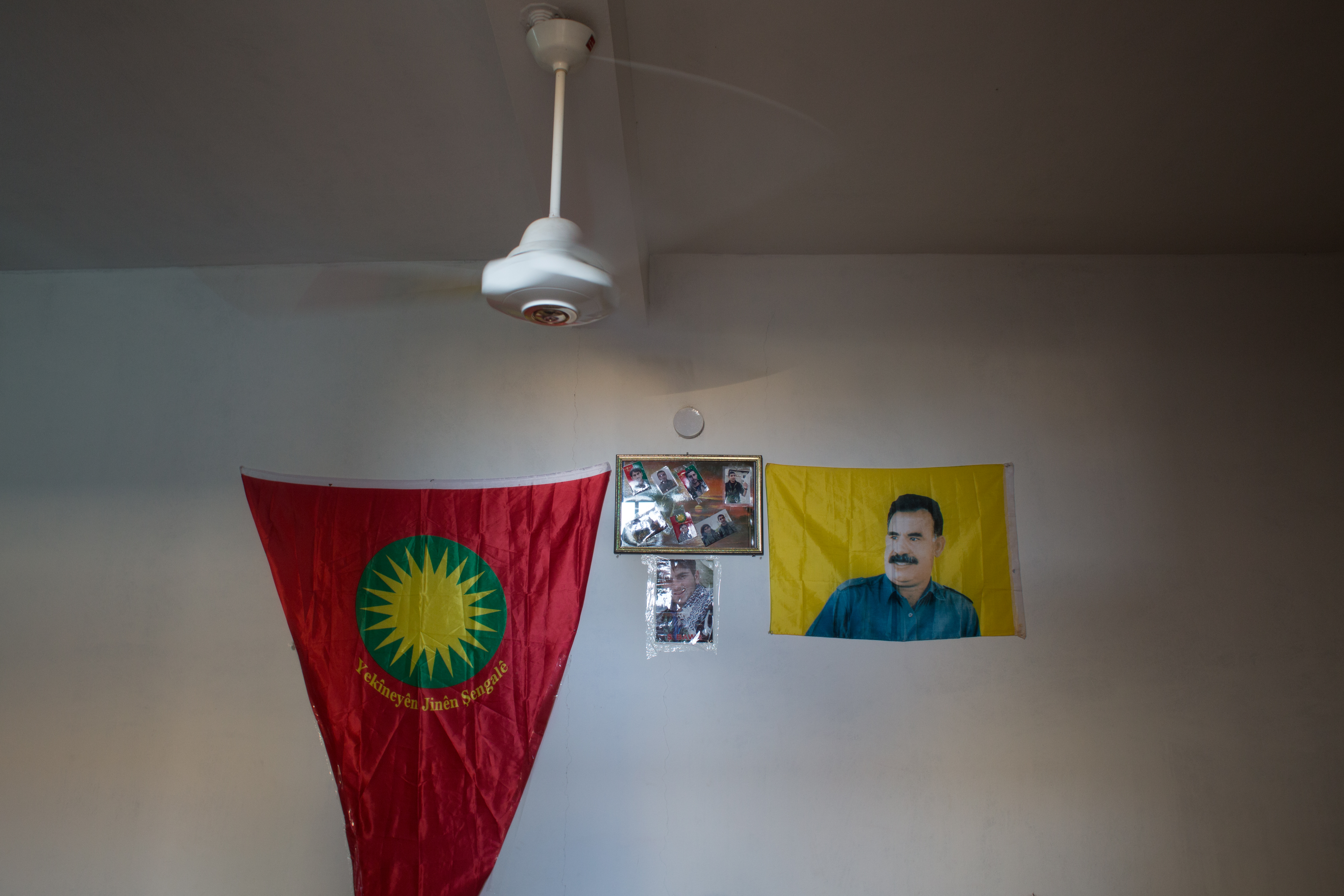 In all of Rojava’s public buildings images of the Kurdish sun and Ocalan, one of the PKK’s founders, are omnipresent. Photograph: Arianna Pagani

Inside the customs offices, procedures are strict and thorough. Anyone without a valid reason to travel and without detailed plans and documents is denied entry. Kurdish flags, yellow suns in the middle, flutter in the breeze and the face of Kurdish President Massoud Barzani stares down from the walls.

Northern Syria has been de facto autonomous since 2012, when Assad’s forces withdrew. The PYD, part of the Syrian opposition and an offshoot of the Kurdistan Workers’ Party (PKK), alongside its military wing, the People’s Protection Units, took control of the region. The PYD controls and runs the cantons of Gazira, Kobani and Afrin, and in 2013 it established the autonomous Kurdish administration of Rojava, officially known as the Democratic Federation of Northern Syria.

The border between Iraqi and Syrian Kurdistan is a small metal bridge for trucks and cars. Civilians use small motorboats to cross the meandering Tigris River, a source of civilisation and today the focus of geopolitical dispute. Two elderly women transport a washing machine into Syria on one of the small boats; it also holds sacks of grain and baskets full of vegetables.

The Faysh Khabur crossing point, which opens only intermittently, is the only legal entry point for people and goods between northern Iraq and northern Syria. It is a bustling place, surrounded to the north by Turkey and to the south and east by swathes of land fought over by the Syrian regime and the Islamic State.

Its position between the fronts has left this area economically isolated. Northern Syria, known as Rojava, has too little petrol and hardly any bread. Replacement parts for cars and machines are in short supply, as is medicine and military equipment, people waiting in the queue at the checkpoint say.

Ossama M – fixer and trusted driver – says shortages have left the population on the brink. “People are wondering how they can survive. In the last [few] years, there has been an increase of war zone smugglers who traffic gas and even cement and steel.”

For a stretch on the Iraqi side, the road runs along a seemingly endless concrete fortress topped with barbed wire, built by Turkish troops. The Syrian border section offers a completely different view: low brick houses cluster around small grocery shops, and animals graze in fields. Here, the Asyish (local police) keep strict control, but the atmosphere remains hospitable and friendly to foreigners. 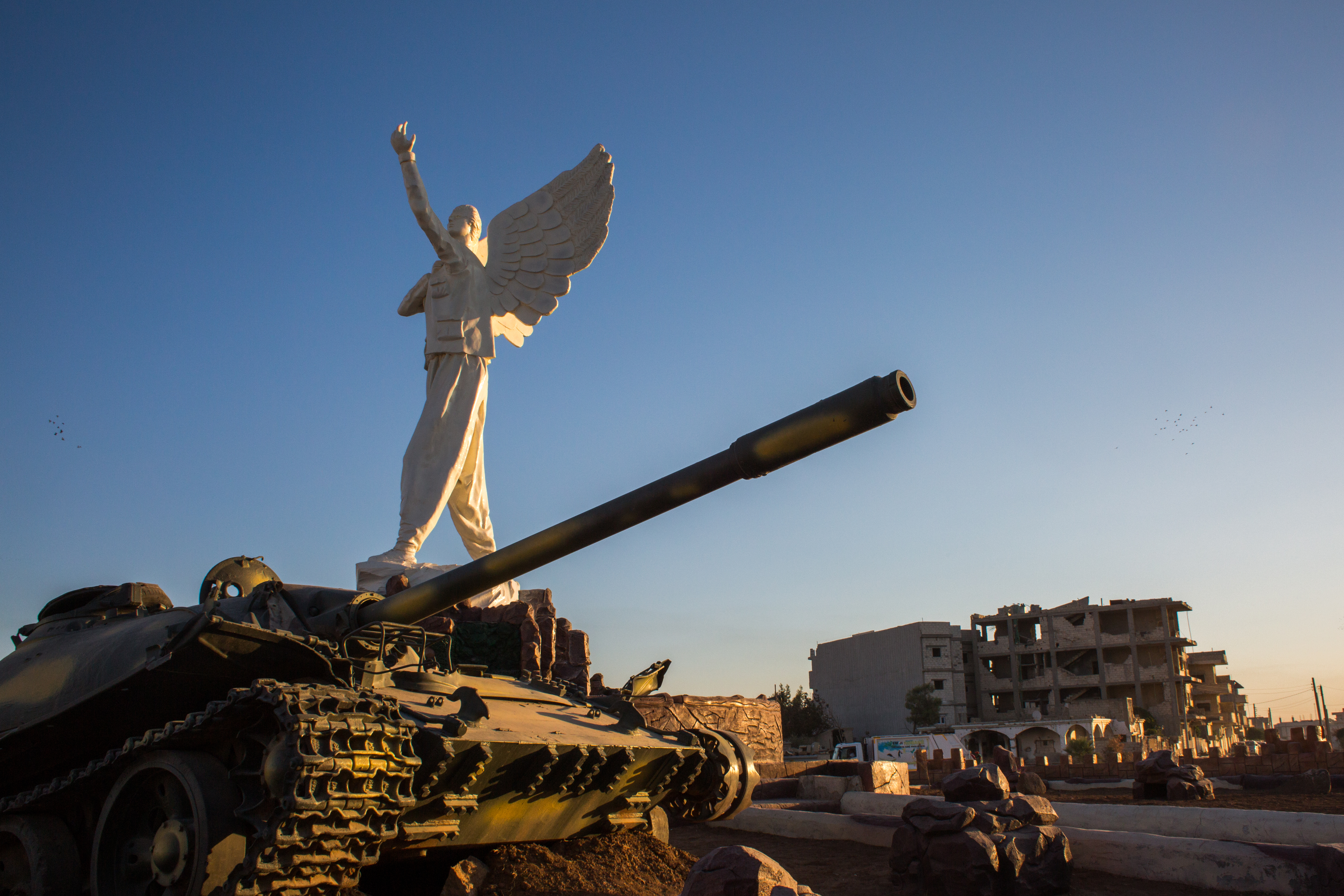 The statue represents women’s resistance and sacrifices. The surrounding area is planned to stay destroyed and act as an open air museum. Photograph: Arianna Pagani

“You are welcome in Rojava, you can stay as long as you want,” says Arshak Bavari, Head Press Officer for the PYD, telling zenith that he was arrested several times for supporting Kurdish independence while the region was still controlled by the regime of embattled Syrian President Bashar Assad. “Finally, I’m free to teach the Kurdish language at the university.”

The Kurdish-Syrian project has grown as an alternative to autonomous Iraqi Kurdistan and Assad’s central government. In the heart of the Kurdish enclave, most photos of Assad have been removed. In their place hang yellow and green flags with a red star, photos of martyrs who fell in battle, and the smiling face of Abdullah Ocalan, a jailed Kurdish nationalist and one of the PKK’s founders.

Proponents of northern Syrian-Kurdish independence draw on his ideas, backing a form of governance they call democratic confederalism. Their ideas are big. They propose breaking down national boundaries, particularly in areas with a large Kurdish population in parts of Turkey, Syria, Iraq and Iran. They tout a future where women are community leaders and environmental protection is codified in law.

In a military base just outside the Gazira canton town of Amuda, YPG spokesperson Nori Mahmoud explains how the system of direct democracy works in practice: “Every city has a civil council consisting of commissions responsible for managing water, security, schools, environment and gender equality. We are not the authority; people govern themselves.”

Following the end of Assad’s rule in northern Syria, he says they have tried to create an environment where Arabs, Kurds, Assyrians and Turkmens can live together. While a complex web of competing and interlinking factions in the Syrian conflict has destabilised or destroyed much of the country, they have adopted their own approach.

“We choose the third road – neither with the regime nor with the rebels,” he says. “Here, we try to protect people and guarantee their rights. We do not want independence. We do not believe in boundaries. We believe that all people – men and women – have rights as human beings.”

Shaking up Society in Jinwar

Some of these beliefs are on show a few kilometres from the town of Qamishli in northeastern Syria. Deriving from the Kurdish word for woman, jin, the village of Jinwar says it welcomes widows, single women and those who reject the classic family model. Arab and Kurdish women fleeing ISIS have built 21 homes over the last seven months. They also plan a community garden and kitchen, an area for public meetings, a building for small craft businesses and a training academy.

“We have to defeat the patriarchal mentality of society and try to separate religion from politics,” says Romet Heval of the Genealogy Academy. “The options for women go beyond marriage, life-long mourning or being locked in the house. Women have shown great courage and strength on the battlefield, but it is important that they are at the heart of the construction of our society.”

Jinwar plans to welcome female fighters who were involved in the battles against Daesh. Asmin Kobane, a 19-year-old sniper, sits cleaning her weapon inside the secret headquarters of a unit of the Women’s Protection Units – an all-female branch of the People’s Protection Units known as the YPJ – in eastern Raqqa.

“We are here for the revolution, to save other Yazidi kidnapped by Daesh,” she says – she comes from an area that was until recently the de-facto capital of the militant group’s ‘caliphate’. Asked about the future, she says: “I don’t want to get married. There are other fights ahead, not just military ones. We have to change the mentality of our society to make sure that these things will never happen again.”

This autonomous region is one of a few positive examples of viable self-governance emerging from the tragedy of the Syrian revolution. The area has seen the emergence of cooperatives and alternative economies based on equality and ecological principles. Women’s participation is a central characteristic of the system, and civil marriage has been introduced and polygamy abolished.

But the ongoing Assad regime challenges the survival of social innovations and the independent Rojava region, according to Andrea Glioti, editor of independent online news website SyriaUntold. The area will likely have to scale back its ideals because of the presence of Russians in Afrin, north of Aleppo, and of US military bases in Raqqa province.

“How much of this revolutionary and libertarian dimension of Rojava can be maintained when it has to compromise with the regime and with the US?” Glioti asks.

The social overhaul will also have a tough time gaining acceptance from powerful and conservative tribes. “One of the biggest challenges will be whether they will be able to include the local [non-Kurdish] populations,” says Glioti. 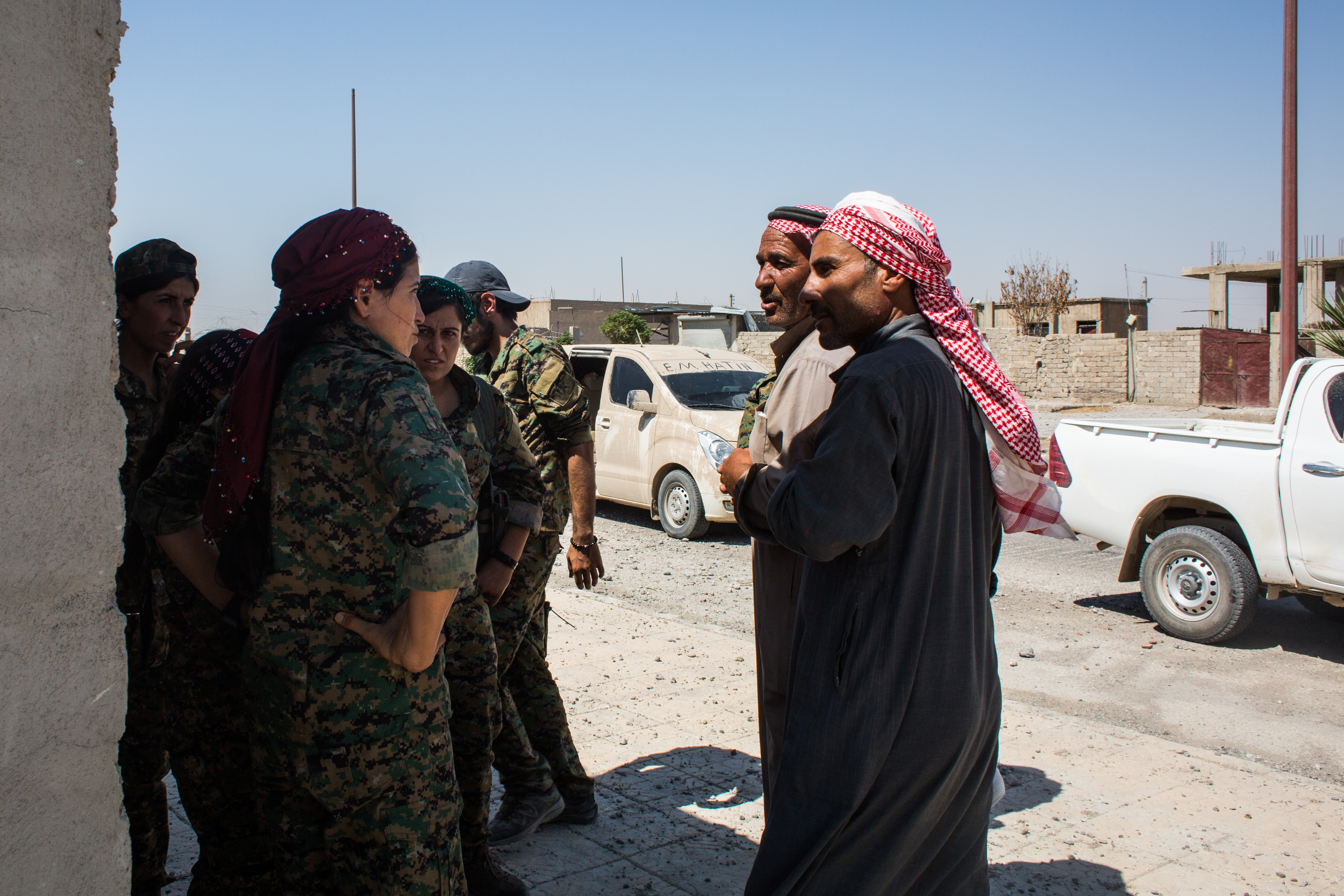 In Rojava men and women are on an equal footing. Photograph: Arianna Pagani

Around the villages liberated from IS at the gates of Raqqa, the Euphrates and its network of irrigation canals have transformed the arid, dusty landscape into lush farmland. Women toil in bulgur wheat fields, while men work trafficking a type of diesel known as mazout.

Some civilians who fled Raqqa a month ago now live in the village of Samra east of the city, an area liberated during the offensive. “We are very tired, we lost everything. We paid a smuggler to escape from the city,” says one, describing raising a flag on arrival at the SDF checkpoint. “We don’t know what will happen in the future. We just want to go back to Raqqa.” But inside a wrecked building just behind the front lines, Saleh Mohammad says he fights alongside Kurdish soldiers in a mixed SDF unit.

“For me, there is no difference between Kurds and Arabs. We are the children of this society. Our goal is to fight injustice and get rid of it. We will wait and see what happens in the future.”